I mentioned a family situation last month, and I’ve been a little out of commission for a while, but now I am back. I was traveling to be with my Grandma at the end of her life. Thank you for bearing with me.

I’ve written a bit about the experience elsewhere. My grandma has since passed away. There will always be more to say.

I feel it’s relevant to mention here in part to explain my absence, and in part because I have been thinking a lot about touch. I gave Grandma a lot of massage in those last weeks. I held her hand a lot and rubbed her feet. Massage skills came in handy when she needed to get comfy. She was at home, in her own bed, and my extravagant stacking of pillows for side-lying and semi-reclining positions soothed her and impressed the visiting nurses and aides. We swapped tips on adjusting bodies as my grandmother became less and less able to participate in the moving. Comfort is my wheelhouse. That was the thing that I could do.

Years ago, when I signed myself up for massage school, my grandmother was not on board. Never one to mince words, she told me it seemed like a waste of my intelligence. It stung. Over my time in school, I regaled her with anatomy knowledge and understanding of the body and talked about massage research. That was back when I thought I had something to prove. She told me that she had participated in a massage study at her local university in which they gave massage to the elderly each week and interviewed them before and after, that massage was a nice luxury, but that she never felt any different afterwards. I asked if she’d requested a copy of the final study, if she was aware of the findings (she wasn’t). I said that I would be interested to read it, particularly as her experience might not have been typical of people in her age bracket. She was a social butterfly. She did her exercise tapes 3 times a week and was active every day. She was in great shape until she wasn’t, and I pointed out that more isolated and less active folks her age might have had different outcomes. She did not disagree.

Over time, I let go of the need to prove the worthiness of my profession to my grandmother. You can’t win ’em all. But I knew that she softened on the topic because she asked me about work instead of skirting the topic, and she clipped stories from the paper about the benefits of massage and mailed them to me, “but you already knew this” written across the top in her curly handwriting. We talked about massage therapy like she’d never spurned it. Water under the bridge, joining the flood of all family skirmishes let go over time.

When I went to see her when she was dying, I wasn’t trying to prove anything. I didn’t think much about offering massage as a professional. I did think a lot about touch on the way there. I thought about the time I visited when I was a little girl and she was a widow, and I shattered her heart by asking at the airport, “who will give you hugs when I’m gone?” I thought about childhood cuddles, what it is to be held, the smoothing of hair away from foreheads. Bill Withers’ “Grandma’s Hands” played on a loop in my head even though my own grandmother was an atheist (no clapping in church there). I thought about how she once told me that, if you were ever really curious about how old a person was, hands were a far better indicator than the face. Hands don’t lie. Massage metaphors abound.

And when I got there, I took extra time to notice hers. I felt weird taking a picture of such an intimate thing in this age of snapping pictures regularly of so many trivial things, but I wanted to keep it for myself, the memory of her hand in mine. I wanted to make sure I remembered the mountains of her knuckles, foothills and ravines of extensor tendons, gentle folds of skin that had seen a lifetime of sunshine and washing up liquid, telling a longer life story than her smooth-skinned face. I held her hand. I rubbed her feet. I traced circles with fingertips along the base of her skull and rubbed her back.

One afternoon, she complained that her back hurt from lying down for so long and asked for a massage. I set her up in side-lying and braced myself in a sturdy professional stance, lunging as best I could in the awkward space, steadied for a longer back rub than usual. I gave her a long massage, all the love and ease that I could bring, sweeping strokes and circles, gentle. I ended up perched at the edge of her bed, nestled in the nook above her folded legs, massaging her scalp. Her hair was silvery white and still beautiful. The room was very quiet. And then she started to cry.

“I wish everyone who was dying could have a massage from their granddaughter,” she said, and added, “I can’t think of a nicer bon voyage.”

Payback for the way I shattered her heart in the airport all those years before. The kind of love that pierces. In the days that followed, she mentioned the need for massage several times. I never would have asked for such a gift. She never would have offered it up if it wasn’t true.

Love your people. Touch them if you can. Hold hands. Perch yourself on the edges of beds, on the ledge of desks, place hands on backs and arms in passing. Smooth hair from foreheads. Wrap your arms up into bear hugs. Plant kisses on cheeks or the backs of hands. Remember what it is to hold and to be held. Touch matters. Get it where you can. 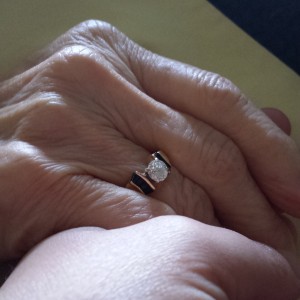 ← Closed This Week
Next Week: EveryBody Deserves a Massage! →

One thought on “Touch Matters”